Today in Science, we have been exploring how sound travels.

We learnt that sounds get quieter as the distance between the sound source and your ear increases. Sounds travel as vibrations. As the sound waves travel, the particles of whatever they are traveling through vibrate, or move quickly on the spot. The further the vibrations travel, the more they spread out. As they spread out through more and more particles, the vibrations become smaller and smaller. This causes the sound to get quieter and quieter. This is why sounds get quieter and quieter as you move further away from the source, until you eventually can’t hear the sound at all. 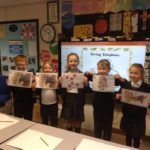 We experimented with a string telephone. We found that when we were talking in our normal voices we couldn’t hear each other across the hall. However, when we used the string telephone, we could still hear our partner. This is because when we use the telephone the vibrations of our voice travels through a solid – the string. However, when our voice went into the air, the vibrations spread out and got smaller as they travelled.

The string and the cups are solid, so the particles are much closer together than the particles in the air, which is a gas. The sound energy can travel from particle to particle far easier in the solid string telephone, so the sound of your voice is louder over the same distance than it was in the air. 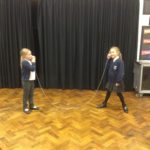 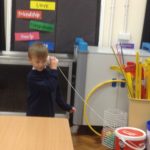 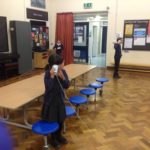 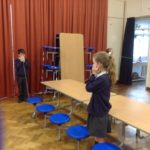 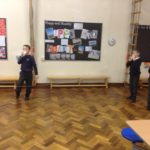