Living and Learning – I can take part in democratic decisions

This week, we have been discussing in class what it means to be part of a democratic decision. 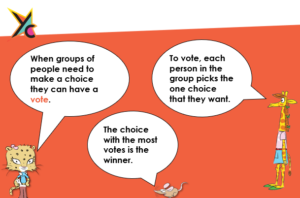 The children were given a choice of two songs to sing in collective worship. We had a vote and the song with the most votes was the song we sung. We discussed how sometimes things might not go your way but we have to be respectful to the decision.

Isla “That’s ok because next time we might get to sing the song I chose.”

Today, we had another democratic decision to make. On Friday 27th May we will be celebrating the Queen’s Platinum Jubilee-that’s 70 years as Queen! Each class will learn and perform a dance from each of her reigning decades, which we will share at the party.

The children were given a choice of two songs from the 90s (are chosen decade) and we had a vote. The song we will be performing is 5,6,7,8 by Steps.